Who doesn’t love reading a good success story?! Especially when we are challenged in a specific area, it seems encouraging, uplifting, and insightful to read how someone else rose to the challenge and succeeded where I am struggling. I’m deeming Saturdays “Success Story Saturdays” and if you have been successful in some aspect of your financial life, I’d love to share your story here. In the meantime, since I’m hobbling along on this walk, I’ll be sharing some of my old and new successes, no matter how small or old.

One thing my hubby and I did right was throw a low key wedding (ten years ago in October!). Although funds were present to throw a large bash, we knew from the get-go that the invitation list would be small, the affair would be on the casual side, and that we’d celebrate a marriage – not just a wedding.

I called up my hometown church and asked for availability on a church camp they run. My grandfather donated the land to open the camp, which I attended for 9 years, so it holds a special place in my heart. They had an opening in October, and given the history, allowed me to use the camp for free. The church secretary even brought huge pots of mums to decorate the simple stone chapel we hoped to use for our wedding. (It rained – of course – and we moved inside an A-frame chapel with the mums right outside.)

Since we were planning an outdoor wedding in Tennessee in October, we had a country fall theme going by default. This made decorations a breeze because friends and family had lots of things to borrow and spread around the reception site – a rustic lodge at the camp which already fit the defacto theme.

I selected a $400 dress that had red details on it and put my bridesmaids in firey red tea length dresses. I’m proud to say that one of my bridesmaids even wore her dress again, so even she “saved” money!!!

I was in school and job hunting, so I knew better than to attempt to make invitations myself, but I did select some of the cheapest invitations I could find and ensured I wouldn’t have to pay extra postage because of the size or weight. I placed a preserved autumn leaf inside instead of tissue paper. It was a slightly added expense as tissue paper came with the invitations and we had to buy a bag of leaves off Ebay, but I think it was a nice touch and wasn’t a huge expense.

My husband enlisted a family friend who is a minister to perform the ceremony. He had to travel a great distance but he only charged us his usual ceremony fee. 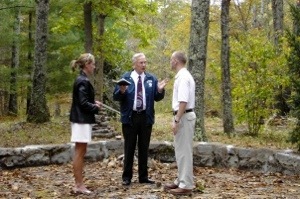 Rehearsal at the chapel in the woods

We took premarital counseling classes at a local church and got a discount on our license fees because of that. We would have done the counseling anyway, but the fee reduction was an added bonus.

I rented a few chairs so folks could sit and a horse drawn buggy so older folks didn’t have to walk down a wooded trail. I viewed these as necessities, but they were fairly cheap because we were out in the middle of nowhere and dealing with people from the area – not big event firms.

I enlisted my sister to make a cupcake tree instead of having a traditional cake. She backed out at the last minute and I scrambled to get a professional. I found a lady who had just started a business and she cut me a good deal in order to build her portfolio. She threw in a “cake topper” so we’d have something to cut and made a beautiful arrangement, while my sister came through for the groom’s cake. It worked out splendidly! 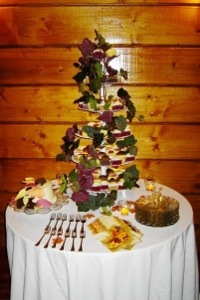 I purchased bulk foods and enlisted family to help me set up a snack reception. We had pumpkin bread and maple candy and cranberry turkey wraps and called it a day. 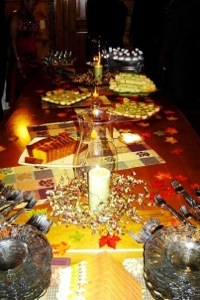 Flowers were done by a professional florist, who was a friend of the family and cut me a deal. But even then, we selected simple bouquets and corsages.

I hired a photojournalist from the area to take wedding pictures. His fee was $400 and then I just had to have the prints developed. Hubby is an expert Photoshopper, so he did all the retouching that we desired. 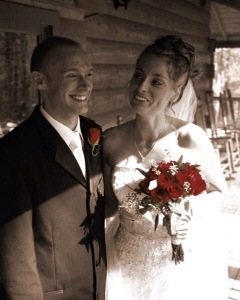 We did rent a limo to take us from our rural wedding location to stay in Nashville for one night before heading out on our honeymoon the next day, but it was either that or rent a car for our entire stay and it worked out to be around the same cost.

I did my own make-up after a free consultation with a make-up store, but did go in for an updo, which wasn’t expensive at all. I had a bridesmaid in the area find us a good deal from a local salon.

The one area that didn’t go so well, but has become a fond, funny memory is my dress. I had tried on a gorgeous, simple gown and loved it. I did not love the $2500 price tag and I pretty much had to order it the day I tried it on in order to ensure delivery in time. I opted not to do it, but I could not stop thinking about that dress. Even after I bought my other dress and got it in, I was dreaming about that $2500 dress. With hubby’s permission, two weeks before the wedding, I called the store and asked if they’d sell me the dress off the rack, which had been a perfect fit. They agreed to sell me the dress, veil, and shoes at a deep discount. I took both dresses with me – just in case – and wore the literal dream dress. Yeah, I had to pay for two dresses, but I console myself that my two dresses still cost less than most women’s singular dress!

Our price tag for everything was less than 5k, with the largest “single” expenditure being my two dresses. I think what helped us tone the cost down was that we were the first of our group to get married, so there was no effort to keep up with the Joneses. The camp’s availability was also limited, meaning our engagement was a bit short (four months) and we didn’t have time to order expensive dresses or invitations that had long turn arounds, and we had to look for semi-professionals to help us out in many areas because they weren’t booked solid, unlike their more expensive professional counterparts. We also were keenly aware that this was a one day affair that was simply a gateway to a lifetime together. We focused on the marathon, not the sprint!

One thought on “Success Story Saturday”

Tell me what you think! Cancel reply 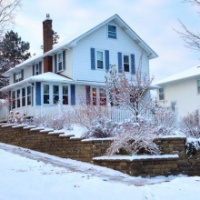 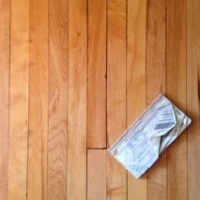